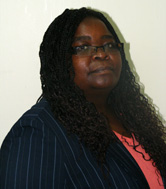 Dr. Ebby Madera is the immediate former president of Abeingo (2014-2018) and current Board member. Dr Madera started her career in Kenya as high school teacher after graduating from the University of Nairobi. She taught for several years before moving to the ministry of education as an education officer.  She came to Canada to further her education and obtained a Master of Arts and a Doctorate in education measurement from the University of Toronto. Ebby is currently working with the Ontario Public Service as a psychometrician.

Ebby is involved in the community. Abeingo Association has through its INUA-Abeingo Scholarship Fund, raised funds and supported over 40 needy HIV Aids orphans in Kenya.

Ebby and her husband Samson are also actively in involved with various community projects in their home village Chatamilu.  Together with the Vancouver monthly meeting, they raised funds and rallied the community and constructed the Chatamilu Primary school.

Edith Jacobet Wambayi is a Community Health Promoter and a Research Consultant with Health and Life Promotion Research Consultancy providing research and community education and support services to hospitals, local & international organizations and individuals. She is also a member of the broader Kenyan Community in Ontario (KCO). Edith provides support on the social determinants of health to these and other communities in Canada. Prior to migrating to Canada, Edith worked with the Ministry of Health in Kenya for over 10 years conducting disease surveillance, prevention and control as well as research. She served on various Ministerial committees.

Edith holds a PhD and M.Sc in Medical Sciences, a Bachelor’s degree in Education/Science, a Diploma in Community-Based Program Planning and Management, and several certificates in the health field. With a focus on HIV/AIDS, Edith has facilitated community-based workshops in Kenya and Canada in the fight against the scourge. As well, she is currently conducting research on HIV/AIDS among Toronto’s African and Caribbean communities. Edith also works with several Provincial, National and International AIDS Service Organizations (ASO’s) as well as non-ASO’s. Edith is a member of the Ministerial Advisory Council on HIV/AIDS. The Council provides advice to the Federal Minister of Health on the National Strategy on HIV/AIDS. Edith is also Executive Director of Uzima Womens Foundation, a Toronto-based non-profit.

Joseph has been a resident of Ontario Canada since 2000. Joseph has demonstrated outstanding leadership right from Kenya where he was a High School teacher and Vice Principal.

Joseph has served on various boards as a member and director and has been involved with a number of committees in the University of Toronto such as the Hart House Steward Board, Equity committee of the Faculty of Education at Ontario Institute of Studies in Education (OISE). He also served as member of the Graduate Education Council of the school of Graduate Studies.  He has represented Graduate students at OISE’s Faculty Council. He has been actively involved in various University of Toronto committees like the Graduate professional Skills Development Committee, E-thesis committee and Career Users Council. More recently, Joseph completed his term as President of Graduate Students Union, University of Toronto.

Joseph is the founding President of Abeingo Association Canada through which he has contributed his vision and leadership (2004-2006). He is also a founding member of the Kenyan Community in Ontario (KCO).

Joseph is a recipient of the Gordon Cressy Student Leadership Award 2004 and Arbor Award 2007 of the University of Toronto.