In Memory of Leonard Wandili 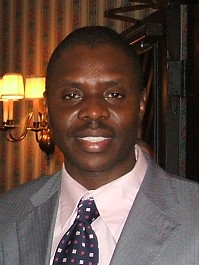 We regret to announce the death of Mr. Leonard Wandili who was a board member and Director of Abeingo Association Canada. Leonard passed on during the morning of 6 Oct 2021 in Bowmanville, Ontario.

Leonard was born in Western Kenya. After graduating from Friend’s School Kamusinga located in Kimilili – Western Kenya, he taught for one year before immigrating to Canada in 1989. He enrolled in George Brown College (Toronto) where he earned a Diploma in Information Systems. Further education included a B.A. Political Science (University of Toronto), M.Ed. (York University); and was currently working on his PhD at the University of Toronto, OISE.

Leonard was recently appointed to the Immigration and Refugee Board of Canada (IRB) where he worked till his demise. He was on a leave of absence from the Toronto District School Board (TDSB). Leonard was an experienced education administrator (International Languages and Cultural Heritage Programs). He initiated several international language courses targeting community-specific needs for children of immigrants, including Kiswahili language classes delivered mainly to children of the East African diaspora.

Leonard was a founder member of several academic and community associations in Canada including the African Heritage Educators Network (AHEN) and the Kenyan Community in Ontario (KCO) where he served as the founding President. He also served on the board of CES (Community Education Service) Canada and Abeingo Association Canada as a Director. He was a founding member of Abeingo Association Canada and served as Director for 2 terms.

Until his demise, Leonard lived with his wife and two sons in Bowmanville, Ontario. Funeral arrangements are underway and it is expected that he will be laid to rest on 23 Oct 2021 in Bowmanville, Ontario. The board of Abeingo Association Canada and the entire community wish to pass their heartfelt condolences to his wife, sons and the entire Wandili family. Leonard gave us so much in his entire life and we owe him a debt of gratitude forever. RIP Leonard.